To get a better look, click on any picture and you should get a full screen version.

So here we go with another sea day.  Not much news

Fearn from the opera quartet has joined the art class, she is doing both morning and afternoon sessions.

I found out from Charlewin that the lady yesterday is fine.  Apparently it was an epileptic fit.

And after dinner, we went to the Supper Club to listen to Coral and Sam - we love the peace in there.

It wasn't peaceful at the end of their set however, because one of the dancers, Genie, came in to do her very first ever singing set, and she was supported by every member of the entertainment team and a few passengers.   The supper club was full.  She was good as well.

So it's a sea day, Peter and I got up to run registration for the art classes as per normal, but Tia and Gerry are not about today.  Tia isn't well.  I know that the last time I saw her, she had just thrown herself down on a sofa because whe wasn't feeling well with her indigestion problems, so I assumed it was a continuation of that.

Once Peter's class was up and running, so I sat in the library as usual, ended up talking to Hazel and Phil.  Just after they left, I looked up to see the young lad who makes coffee n stuff in the library, Charlewin, helping one of the passengers.  He normally does. She sometimes has difficulty standing, and he makes sure she is on her feet and stable before she walks off.

Except this time she wasn't getting up.  She seemed to be shaking, saying "I don't know what's the matter with me".  She was obviously in distress, he wanted to call the medical centre, but he was holding her up.  Of course I dashed over to hold her whilst he made the call.  She was shaking, eyes closed.  I'm saying to her, "Just relax.  Don't be scared.  Help is coming."  He's telling her to breathe in, breathe out. Nice and calm.

It didn't take long for the medics to turn up.  Charlewin told them that she'd had a seizure, and they hurried her away.  I hoped she would be OK.

Then as we tidying up the class after the morning session, there was a code Alpha up on deck 14.  We found out during lunch from Joanne the pianist that a guy had passed out up there.  Due to the heat we thought, easy done with too much alcohol.

But maybe it was a little more than that.  As the afternoon wore on, the Captain first announced that we would have to turn towards Spain and prepare for a Helicopter evacuation, before following that with a series of anouncements calling staff to prepare and telling us what to expect.  The helicopter seemed to arrive in no time, and the patient lifted off and taken away before you could say "The irony is that is is quicker to get a helicopter ambulance to a cruise ship with a full medical team in the middle of the Mediterranean than it is to get an ordinary one to an old guy who's had a fall in England".  (It took about 8 hours I think, and he died).

Everybody assumed that the helicopter evacuation was as a result of the Code Alpha on deck 14.  I was hoping it wasn't the lady in the library.

After all that drama, we decided to spend the evening out.  It was either opera in the playhouse or guitar classis in the Brittania Lounge.  We should have chose the opera.

We couldn't see Cagliari at first, because of the massive Virgin ship alongside us.  Ugly grey, and  looking more like the proverbial block of flats than ever, it dominated our view as we woke.  I should have taken a picture, but never mind.  We noticed all the cabins had hammocks though.  Nice.

We weren't in a rush, Peter said he had a vague memory that he liked Cagliari, so we were expecting good things, but once it again, it was hot, and gonna get hotter.  We were also feeling a bit lazy after our walk yesterday, so we took it easy, caught the shuttle bus that would take us across the port around 10. 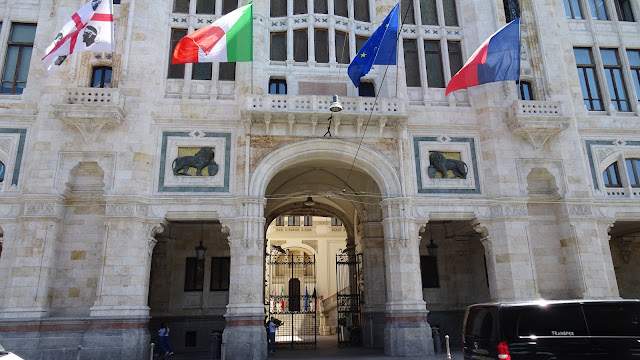 Immediately across the road from the bus, we found what looked like some grand government building, which happened to include the tourist information office.  Hoping to get an idea of good places to visit, Peter was given a map, but not a lot of information.  So we set off walking.

Maybe it was the heat, maybe it was yesterday's walk, but it didn't take long for me to start feeling worn out.  After resting on a bench in Piazza Constituzione for a bit, we made our way on towards the old town.  I think, if I'd been able to see the city and not the Virgin monster, I would have seen that the city is built on a hill.  As it was, I found out by having to walk up it. 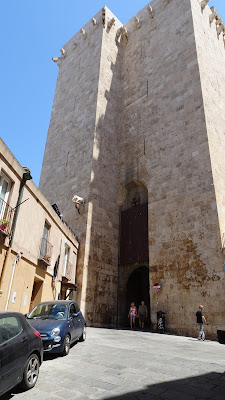 Well, not all walking.  There are a couple of lifts that can help.  The first was marked on our map, near the Elephant Tower, and takes you up the equivalent of a couple of stories high.   We took advantage of it, and found the Elephant tower, which, unsurprisingly, has an elephant on it.

If you go through the gate and look back though, you'll see that the elephant tower doesn't have a back.  A bit like an open dolls house, you can see all it's innards, which are mostly stairs.  For a small fee, you can take a tour up the stairs, but these are at set times, it finding the guy with the tickets is difficult apparently.

Once up there, we quite liked wandering the streets of the old town, which continues to climb up hill.  The were narrow and high, the buildings full of character and interest.  We found a church, an art centre, and eventually, the cathedral. 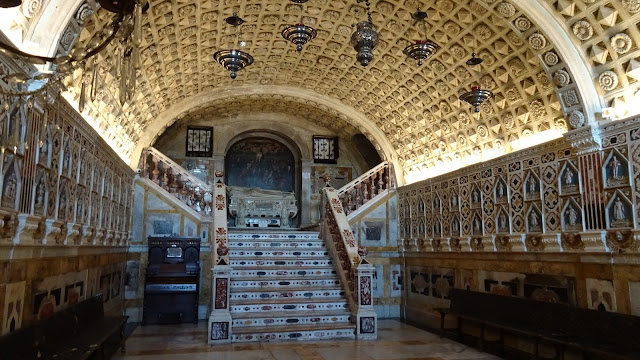 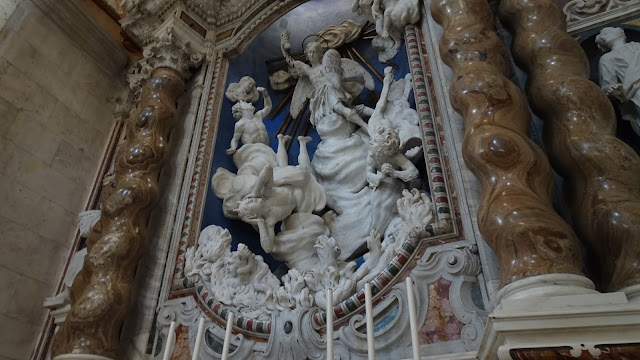 We also found a cliff drop behind the cathedral. A nearby terrace allows you to see from the top across the city as it extends outwards, and a lift will take you the fast way down if you want to the to the sports pitches below. 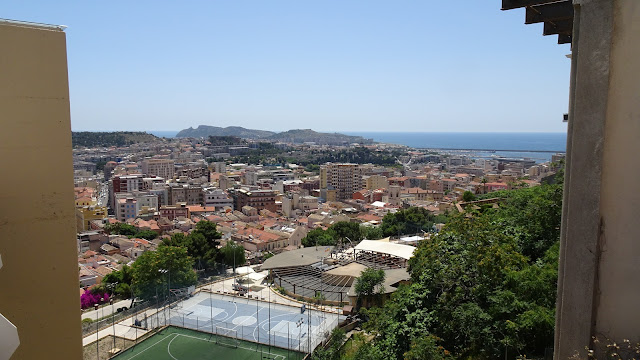 After the cathedral, we thought we'd try to ge to the archeological site and ampitheatre we could see on the map.  We sort of got lost trying to find our way, partly because we were trying to save ourselves walking up and down hill.  Eventually tho', we managed to work our way to the corner of Via Fra Nicola da Gesturi and Via Anfiteatro, just above the roman archeological site.  That's when we decided a well earned break was due, and found Luchia's.  A small cafe catering for the locals.  Beer for Peter, lemonade for me.  Sitting in the shade.  All  was good.

Then it was off to the ampitheatre.  It looked so promising from above, but as we followed the road around and down, it became obvious that it was closed.  So diappointing, cos it looked brilliant. 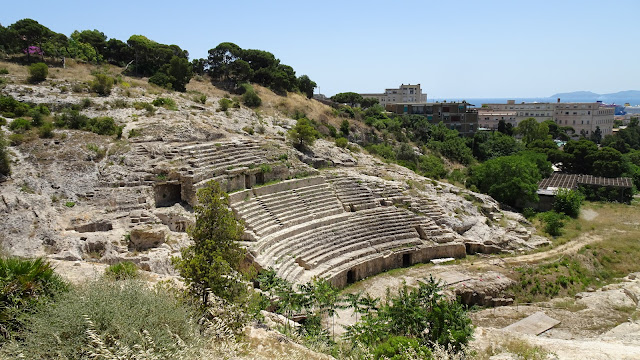 After that, it was back to the ship to cool down and eat choc chip cookies in the Living Room downstairs.

And finally, just to finish the day, a lovely sunset 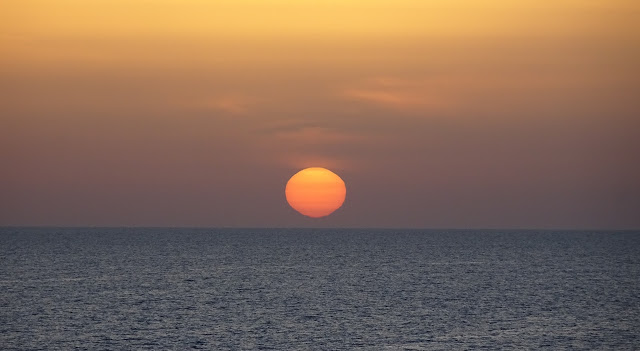 before watching Albert the Magician battle with microphone glitches and a drunk "assistant" but still manage to pull off a really good show.  I've got bored with magicians after seeing loads of them on Britain's Got Talent, and I was pleasantly surprised with Albert's performance.  I had never seen his tricks before.  Bravo!Back to work tomorrow.  It's a sea day and Peter will be running his classes.

dittzzy
I work full time, mother of 4, with one teenage daughter at home. I live with Peter. I love getting out and about, trying out new things and new places. I love Yorkshire, walking and not working. I've got two out of three so far.